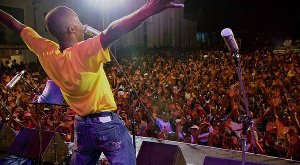 For 6 Decades, the Sound of Good News in Haiti
‘When the Drum Is Beating,’ About Orchestre Septentrional
By LARRY ROHTER

Published: April 10, 2012
Since the founding of the Orchestre Septentrional in 1948, the band’s homeland, Haiti, has endured the nearly three-decade Duvalier family dictatorship, 26 other governments, a foreign intervention, a devastating earthquake and, most recently, a cholera epidemic.

Through it all Septen, as the group is known to its fans, has been that rare Haitian entity that functions flawlessly.

Onstage, whether playing an elegant ballroom or an outdoors festival in the countryside, Septen is a dynamo, with a heady combination of drums and horns driving dancers onto their feet. But to Haitians, Septen’s ability to thrive when all else seems to be falling apart makes the orchestra something more — a bulwark and a solace.

“They’ve created a community institution that is really unlike anything else in Haiti,” Gage Averill, author of “A Day for the Hunter. A Day for the Prey: Popular Music and Power in Haiti” and an ethnomusicologist at the University of British Columbia. “It’s amazing. Few countries can speak of the political swings and economic challenges that Haiti can, but here’s this orchestra that even as it changes with the times, has carved out a distinct sound and approach to music making. In terms of longevity and impact, they are remarkable.”